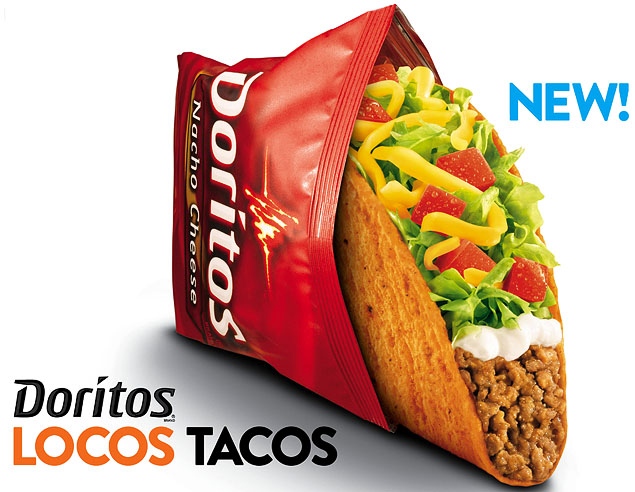 I had of course heard of the Taco Bell Doritos® Locos Tacos for several weeks. Every time I had the same thought: “That is either going to be completely disgusting or completely amazing, and probably both.” I don’t dine at Taco Bell® with the frequency of my younger days (mostly because I don’t live very close to one anymore), so the chance to sample this new dish did not readily present itself.

I eventually decided that if I didn’t seize the day eventually it would vanish from the menu (and most likely never return), so one day after getting off of work I decided to try it. I got off around 11pm, which is crucial because it means it was late enough that I was too tired and lazy to go to the store to buy food or make food, but early enough that my girlfriend wouldn’t be home for another few hours so if I needed to throw it up afterwards I’d have time.

Pulling into the drive-thru I was struck at how cheap the price was. Usually Taco Bell®’s promotional items are downright pricy (up to $3.50 in some cases!), but the Doritos® Locos Tacos are only $1.69 for the regular version, and $1.89 for the “supreme.” I have no idea what the difference is between the regular and the supreme, but I figured that I might as well “go big or go home” and go for the full Taco Bell Doritos® Locos Tacos Experience. The price being so low, I considered buying two, but then instead I decided I liked being alive.

The cashier at the drive-thru was fairly pretty. I was a little embarrassed to be buying such a disgusting food from her. She gave me extra sauce though, so obviously she didn’t think too lowly of me. Really, thinking about it, it’s not too outside the realm of possibility that I was the best-looking man who’d been through the drive-thru during her shift. This is Taco Bell® after all.

The drive home was one of anticipation. I drove quickly, perhaps too quickly, afraid that the culinary masterpiece sitting in my passenger seat would go cold (it did a little, unfortunately).

When I got home, I poured myself a glass of fruit juice to go with it so I could pretend that I make good life choices sometimes. I unwrapped the taco.

I could see immediately why the price was so low. It’s the same size as other Taco Bell® tacos, which is to say, pretty small. The other thing is that like most other Taco Bell® products, it contains that wonderful weapons-grade tube beef. When I eat at Taco Bell® I usually opt for chicken. It’s a bit pricier, but it doesn’t come from a tube and it doesn’t feel like it’s trying to assassinate you once it’s inside your body. In this case, though, I decided to opt for the beef in order to get the “pure” Taco Bell Doritos® Locos Tacos experience (at least as far as you can use the word “pure” when describing a taco with a shell made out of Doritos®).

What distinguishes it, of course, from other tacos is the shell. The shell was the angry orange-red of Nacho Cheese Doritos®, and indeed, taking a bite I could immediately taste the familiar flavor as the shattered bits of corn chip hit the salt receptors on my tongue. There’s also the cheesy aftertaste you experience with Doritos®, as well as a bit of the familiar finger residue (not nearly as much as from actual chips, however).

The Doritos® flavor was soon overwhelmed, however, as I began to masticate the contents of the taco. With a normal bite, it was impossible to tell that it had anything other than a plain corn chip shell except for a slight Doritos® aftertaste.

The taco was quickly devoured, leaving me still hungry. The fruit juice washed it down nicely.